This morning as I raced the cat to the veterinarian’s, I passed by fields engulfed in fog. The air was mercifully cool and the earth was warm and moist.  On the drive I listened to music from the Al Andalus Ensemble who play a “fusion of flamenco, jazz, contemporary with definite flavors of the Middle East.” This music is not only great for muting the sounds of a howling cat, it also is an inspiring CD to paint by. My friend Erin introduced me to this music as she found it helped soothe her beautiful twin babies back to dreamland.

Our Fluffy cat wants to turn into a wild one. In the last month she has spent more and more time outside, prowling through the garden, sitting and peering into the edge of the wild wetland next to us where the pheasants sometimes live. She comes in to eat and quickly wants outside again. The neighbourhood has free ranging cats and they criss-cross the yard searching and exploring. I assume she hangs out with them. It’s hard to know because they move in and out of the tall grasses like spirits.

I belong to an Insight Meditation group in Bear River. We meet on Wednesday nights and I haven’t missed many sessions in the 2 ½ years that we’ve met. I enjoy it a lot — it has helped me in many ways including with my approach to painting. When I got home this past Wednesday, Fluffy was nowhere to be found. In our 4 ½ years here, she has never stayed out all night.

I stayed up until the wee hours periodically going outside with a flashlight and bathrobe, calling her and freaking out and generally NOT practicing any meditation strategies. Finally I went to bed with a list in my head of many terrible scenarios that may have befallen our sweet (and she really is sweet) kitty. After a few hours of sleep it was morning and she had still not returned. I composed an email to 10 of our neighbours, complete with photos in case they saw her. I pushed ‘send’ and immediately got my first response from a friend offering to bring her 3 children to help us search. I thought how amazing it is that I actually KNOW the neighbours and have their emails and that I live in a place where it feels OK to ask for help and to receive it.  Such is life in a small village.

Larry and I finished our coffees and went out to search again. When we opened the door, she was standing in the driveway staring at us! She wouldn’t come when we called and looked a bit spacey. I scooped her up  and felt astonished that she was there in my arms. And she briefly went limp in my arms and felt lighter. In the house she sniffed at her food and water and wanted out again. “You’re grounded!” She listlessly accepted and left the room.

I figured she was tired from her ‘all nighter’, but by lunchtime I realized that it was more than that. She wouldn’t eat or drink at all. I took her temperature which was slightly high. That’s how she and I came to be driving through an early morning fog to the veterinarian’s this morning.

Dr. Doelle’s clinic faces an Ocean Bay and the yard is filled with beautiful perennials planted by his wife  Gilbert who manages their organic market garden, Wild Rose Farm. 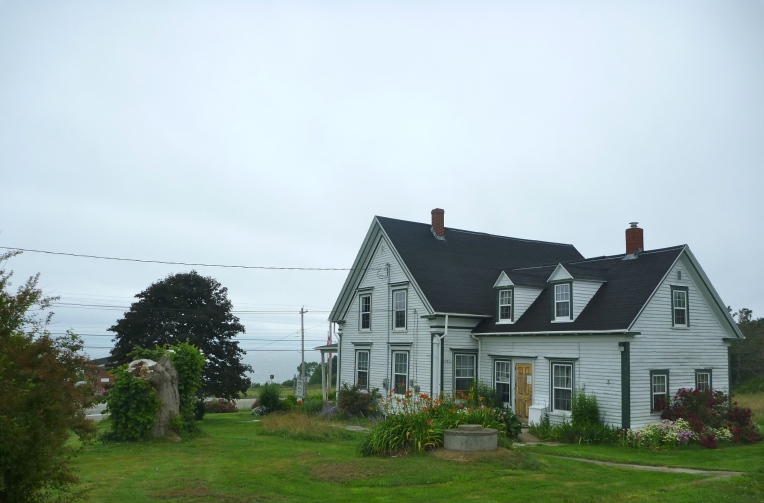 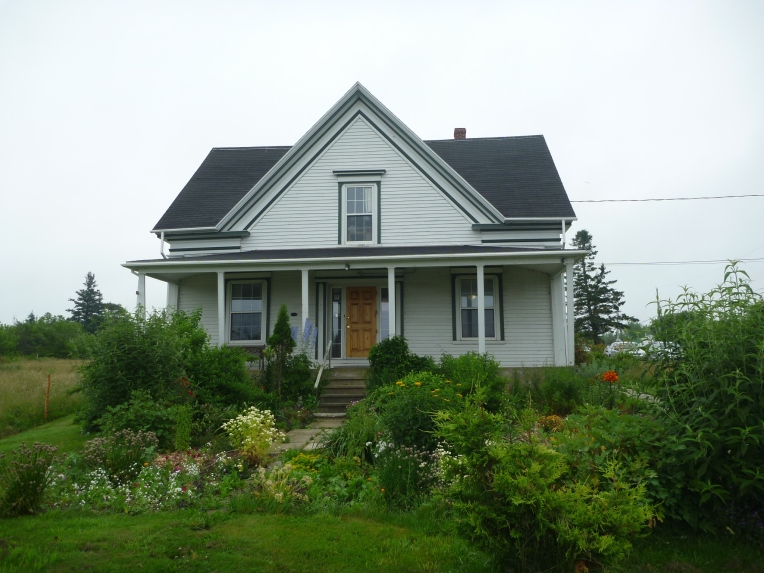 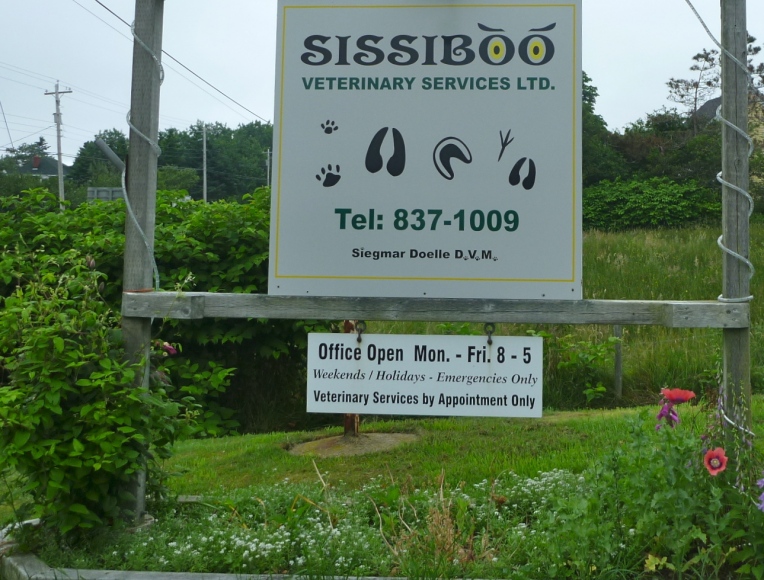 Dear Fluffy’s temperature was now up to 105, on the high side for a cat. She got an antibiotic injection that slow releases for 10 days, we’ve got some protein paste to smear on the roof of her mouth until she starts eating, we’ve got flea medication for when she’s feeling better, and she’s down 2 lbs. The speculation is that she has an infection from another cat’s scratch….which could be from an outside cat or from her step-brother, Lucky. She’s resting and drinking again. So far, so good.

When Fluffy and I got home, Larry was outside with a couple of guys unloading 12 bales of hay for garden mulch. It’s been very dry outside and we want to conserve our well water usage as much as possible. If I put more straw on my vegetable and flower beds, there will be less evaporation. Inside the house, a couple of people had left messages on the phone about Larry’s enamel jewellery class.  On google chat I updated our daughter in Spain about the cat and read about her weekend plans on the Mediterranean.

After a quick lunch, I drove to Annapolis Royal to a show-and-tell workshop about using Liquitex acrylic paints and inks and mediums. Oh it was so inspiring to see some of the neat things you can do with their line of art supplies. I can’t wait to buy some of their air-brush medium and inks for monoprinting.

I came home with ideas, groceries, flour for bread and best of all, Larry made supper.

So now we cross fingers that Fluffy will be feeling better soon. The vet said to call him on the weekend if the cat doesn’t improve.

I have left out a bunch of stuff, like the email from a guy in New York wanting to do a Japanese reality show episode in Bear River or arranging the construction of a plywood box to ship a painting I sold to a family in Florida, or Larry loading the car for our booth in Annapolis Royal tomorrow or ordering more plastic sleeves for displaying matted paintings……there aren’t enough hours in the day to do all the things that each day brings in Bear River.

But now it’s time to wind down. So I’ll pet the kitties goodnight, wish for rain (after the market tomorrow) and I’ll be very thankful for antibiotics and flea treatment; and for husbands who make supper.

The Healing Properties of Daffodils, Turtles and Goutweed

Paintings Hopping in May at the Lucky Rabbit Art House

Inventing a Blue Flower While Breathing

Inside My Painting Studio